Performance Wheels: What does it cost to go Faster? – Racer Sportif

Performance Wheels: What does it cost to go Faster?

Home / Racer Sportif's Blog / Performance Wheels: What does it cost to go Faster? 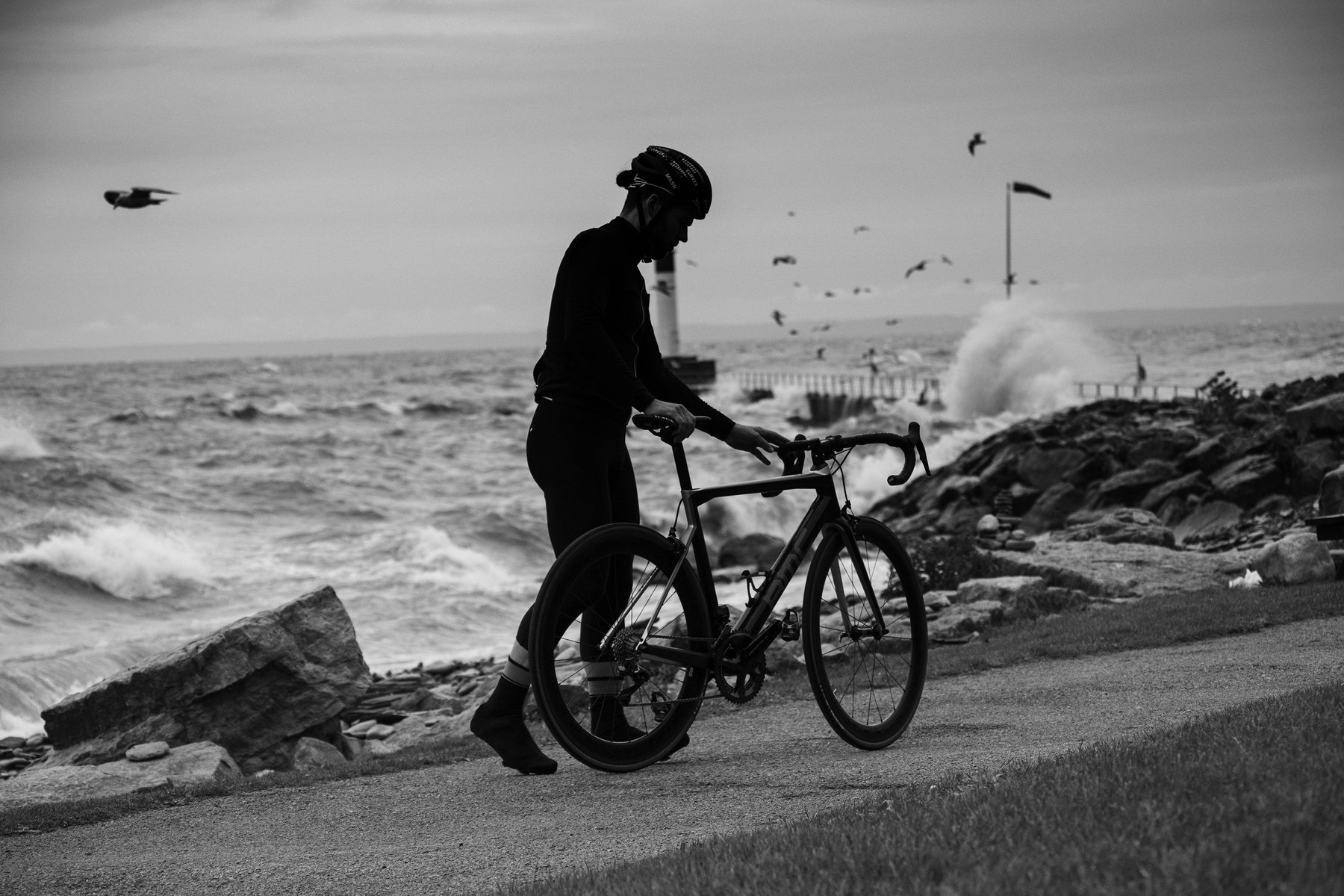 When considering a cyclists speed and ways in which they can go faster, the critical factor that must always be considered is aerodynamic drag. There is no escaping it, no matter how complex the shape of the body, or how fast the wind, a cyclist and their equipment is going to be affected by the effects of the air around them. All you, as a rider, can do is choose the most effective equipment for the environment you are riding in and then optimize your relationship with that equipment. When riding a bike the most important thing to remember is that the only way in which forces from the outside world can affect a cyclist as they ride down the road is via; air pressure and skin friction drag acting on its surface. The overall effect of which is a resultant aerodynamic force, R.

Combating aerodynamic drag would be simple if you were always riding directly into a head wind, as you could just reduce your frontal area as much as possible so that your total drag was as low as possible. However, this is not always the case. A cyclist is subjected to aerodynamic forces from several directions during a single ride. These different wind directions can also be referred to as Yaw Angle. When talking about yaw and its effect on a cyclist, we must first state that there are in fact two kinds of “wind” present; the wind blowing as a result of the weather, and the “wind”, or resistance to motion experienced by an object as it passes through a fluid medium, in this case air. At any one time during a ride there will be some wind blowing, whether it be a 10kph wind blowing East-West or a hurricane, it will act on a cyclist. In addition, there will be “wind” resistance to the rider’s forward motion, acting opposite to their direction of travel. These two wind sources combine to give a resultant “effective” wind, which act on the rider at a given yaw angle. For example, if we ride down the road at 40kph, with a 10kph 90o crosswind, the effective wind has a yaw angle of 14o. This may seem lower than many of us would expect, as I’m sure all of us have felt as though a crosswind is hitting us completely side-on during a windy ride. However, studies have found that between 50-70% of all yaw angles experienced by a rider are lower than 10 degrees, while a further 30% of wind yaw angles are between 10-20o. This increased knowledge of what is actually happening out on the road has helped to define aerodynamic test methodologies for manufacturers throughout the cycling industry; what is the sense in testing products at yaw angles greater than 20o, if the rider/product will never be subjected to those conditions?

Up to this point we have been considering the aerodynamics of a rider and their equipment as a whole. However, wheel drag by itself has been found to be responsible for 10-15% of the total aerodynamic drag acting on a cyclist/bike unit. Therefore, the scope of this article is to consider different carbon clincher wheel sets and their effect on cycling aerodynamics in different conditions. Specifically, we considered 3 sets of carbon clinchers; the Real Speed RS 3/4, the Zipp 303 and the Enve 3.4, which are similar depth; 35mm, 45mm and 35mm, respectively. All three wheels share similar cross-sectional profiles, with a rounded, blunt leading edge, in stark contrast to the V-section profiles previously used by wheel manufacturers. The reason manufacturers use these blunt shapes is mainly due to more consistent performance at increased yaw angles, whereas V-sectioned wheels handle very badly at 5 degrees of yaw and above, because the wind has significant impact on the flat sides with no rounding and thus can push the bike, and therefore the rider. Saying this, there are some aero wheels that have not followed this recent trend of blunt rim cross-sections, examples include Reynolds’ AERO airfoil-section and Mavic’s Cosmic SLR hybrid wheel set. The AERO airfoil-section is not in fact a flat-sided “V” and so is comparable in performance to the rounded, blunt leading edge sections of other wheels.

Figure 1. Wheel testing environment.The scope of this article was to determine which of the three wheel sets perform best, purely in terms of aerodynamics, at a range of yaw angles that are representative of use in the real world. For this, a standard testing protocol was used, which included; measurement of longitudinal and lateral forces acting on an isolated, rotating front wheel supported by two vertical supports. Wind speed was set at 26mph ±0.5mph, and wheel speed was set at 30mph ±0.5mph. Drag measurements were taken over a 20 second average throughout a sweep of yaw angles from 0o-15o, as well as a return 0o measurement. Each wheel was run through the protocol sweep three times and averaged, with the tunnel stopped between each shred. This enabled the airflow to stabilize and the air temperature to return into a repeatable range (81oF ±0.3oF). The wheel was tested in isolation in order to remove the additional turbulence effects created by the various component parts of a full bike, in particular the front fork, which creates a significant region of backflow between the fork and the top of the wheel as well as dampening of the turning moment acting on the wheel. 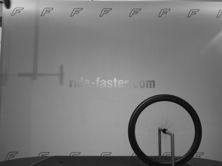 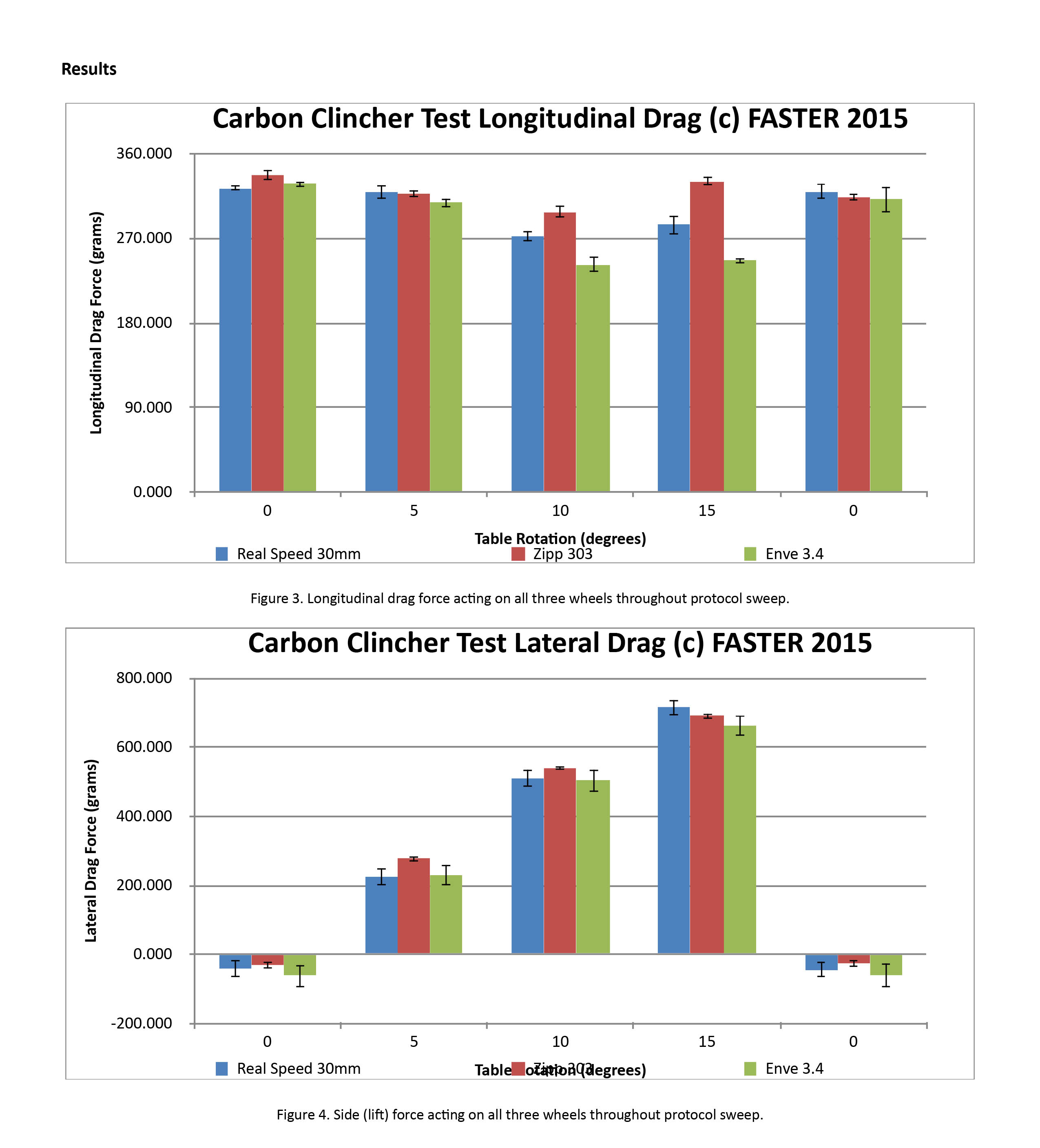 With regards to lateral load, all three wheels exhibited negative values at 0o yaw and then increased proportionally with increasing yaw angle. At 0o, 5o and 10o yaw the Enve 3.4 had the lowest amount of side force, followed by the Real Speed and then the Zipp 303, while at 15o yaw the Real Speed had the greatest amount of side force, followed by the Zipp 303 and then the Enve 3.4. upon return to 0o yaw the three wheels returned to the same order for lateral load and therefore side force. This linear increase in side force with increasing yaw is yet again consistent with previous studies in this area (Greenwell et al, Kuhnen and Godo et al), who all found that the wheel component contributes the most, while the hub contributes the least to overall side forces.

From the data collected during this study, which we have found to be consistent with previous studies, it can be stated that at a 26 mph, at 0o yaw, the Real Speed RS 3/4 produces the least amount of longitudinal drag, on average and so can be considered the fastest of these three wheels into a direct headwind. Whereas, at increased yaw angles the Enve 3.4 produces the lowest amounts of longitudinal drag, so can be considered the fastest wheel when riding with a crosswind blowing. In terms of side force acting on the wheels, the Enve 3.4 performed the best at all yaw angles, with the exception of 5o yaw where the Real Speed RS 3/4 had the lowest levels of lateral drag. As yaw angle increases the side force acting on the wheel remains perpendicular to the wheel and so rotates with it, causing it to become a gradually more in line with the wind direction. In addition, as the yaw angle increases the amount of wheel rim surface area in direct contact with the approaching airflow increases, which will also cause the linear increase in drag force acting on the wheels, as seen in the data. The Zipp 303, had a slightly deeper rim profile, which is likely to be the cause of its increased levels of drag at greater yaw angle.

Throughout this study we have been focusing on the performance of the three wheels in isolation solely with regards to their aerodynamics. From the protocol used in this study, the Enve 3.4 produced the lowest amounts of aerodynamic drag overall, for both axial and lateral forces, the Real Speed was second and the Zipp 303 produced the highest levels of drag force. If we were to further this study other factors could be considered, such as the inclusion of a bike or even just the front fork portion, which is of particular interest in terms of air flow over and around the wheels. From a consumer’s stand point, when deciding what the best wheelset on the market is there are many factors to consider. First of all, what type of riding will you be using the wheels for primarily? What are the environmental conditions like where you will be using them? What is the terrain like where you mostly be riding? These questions bring up a whole range of different considerations, such as different rim depths, rim weight, spoke count, and most importantly price! If you are to break down each wheelset by performance, weight, and price. It would be hard to argue that the Real Speed 3/4 presents a very compelling argument, as the starting price point for this wheelset is $1700.00 CAD, where the Enve 3.4 are at $3250.00 CAD, and the Zipp 303’s are $2799.00 CAD. Sometimes near double the cost doesn’t necessarily mean near double the performance.

Add some profile text to talk about the author