Assos S9 – The birth of a butterfly 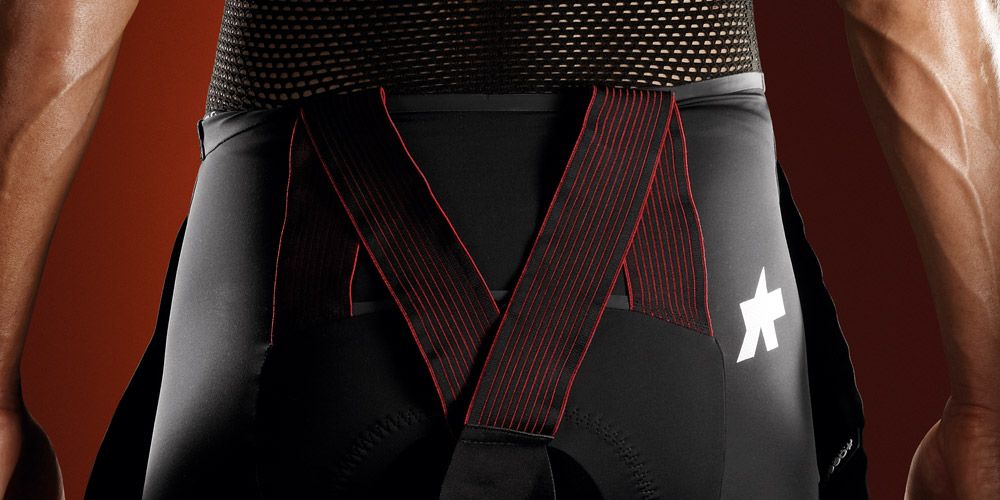 The process of evolution is truly something special. Being born into a cycling family, I have been around bikes and everything cycling all my life. Over this time, I've seen a lot of cool things, and have bared witness to the evolution of different bikes, iterations of different groupsets, and a multitude of different trends.

I can still recall the time when my Father, Dennis would come back from different trade shows in the U.S. Europe and Asia. Always returning with some cool samples ranging from different parts and gadgets. One year he returned from a large trade show in Cologne Germany. This moment stands out as quite possibly the most excited I have seen him about anything that he has found abroad. My initial expectation is that he has found something that will revolutionize the cycling industry. I was disappointed at first to see him unveil a pair of black bib shorts out of his suitcase. I was like "it's a pair of black bib shorts" He replied, "not just any bib shorts, these are Assos bib shorts" My response was "ass" what? That just sounds so weird. Little did I know, that these "Assos" bib shorts, that everyone bastardizes the pronunciation of, would revolutionize the bib short game. Whether it is precision watches, a train schedule that is always on time or producing the best chocolate in the world. This is just the way that the Swiss roll.

These Assos bib shorts were made from lycra, apparently an industry first. Unlike the standard shorts we were accustomed to, that were made from wool. It was certainly foreign, but it did look very slick. Upon further inspection, I could not help but notice how cool the chamois was. It appeared similar in color and feel to the traditional leather-based chamois, but it was synthetic. Its padding was strategic. More importantly, it was perforated. Now that is clever. Out of all the features, the most remarkable thing was how light these shorts were. Going over its hanging tags, there was a square packet attached to it. The label read chamois creme. "What is chamois crème?" The backside captioned that Assos chamois crème prevents bacterial and fungus infections (saddle sores); keeps you comfortably cool by reducing friction. At that point, I was like I heard and seen it all, sign me up!

It didn't take long before these Assos bib shorts were all the rage. This was incredible, as the bibs were close to $300.00, and in the early nineties, that was a lot of money for a pair of bib shorts.

Fast forwarding to the later part of the 1990s, Assos released the next generation of bib shorts. The FI.S2 series. This would be the last generation of Assos inline shorts to be produced entirely in Switzerland. Only custom apparel would resume at the Lugano facility. These shorts featured exclusive blends of Dupont power lycra, the first chamois in history that utilizes an elastic insert. The chamois was a project developed with Cytech – Elastic Interface. 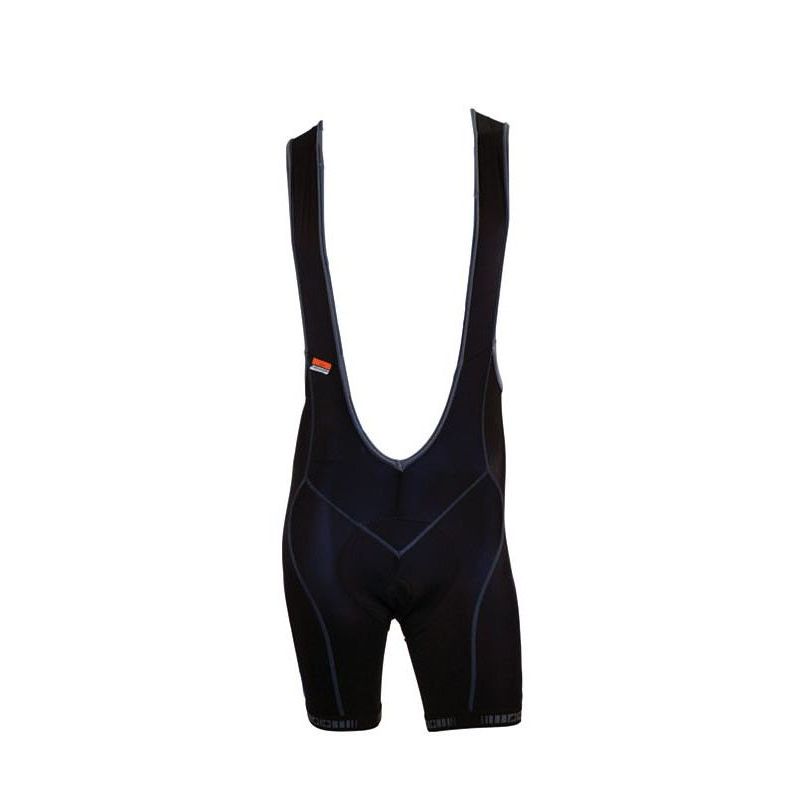 The benefit of this chamois was its unparalleled comfort and compliance due to its elastic properties. Believe it or not, you actually had to apply chamois cream to the pad after every wash, to prevent it from drying out! These slick understated looking black bibs, with its super comfy bright orange chamois, firm shoulder straps that locked you in the "cycling position" Assos locked their position as the undisputed king when it came to cycling shorts. But the best was yet to come…

Ushering into the mid-2000s,  Assos was in a state of transition. So too was the cycling industry. Riding on the coattails of Lance Armstrong's dominance at the Tour de France, the sport of cycling was reaching mainstream popularity in untraditional markets. For a brand like Assos, they were too niche and their offering of the world's best cycling apparel or as they would call "equipment" was out of reach for most newcomers to cycling. For the first time, Assos expanded their line up to offer bib shorts at several different price points. Born was the S5 generation. Featuring the top of the line Fi.13 S5, Fi. Mille S5, and the Fi.Uno S5 bibs.

I never did truly understand how much R & D went into the design of Assos bib shorts until I had the unique opportunity to visit the Assos HQ in Lugano Switzerland. They invited me to come over and get a firsthand look at the successor to the S5 series shorts… The launch of the new S7 series bibs. 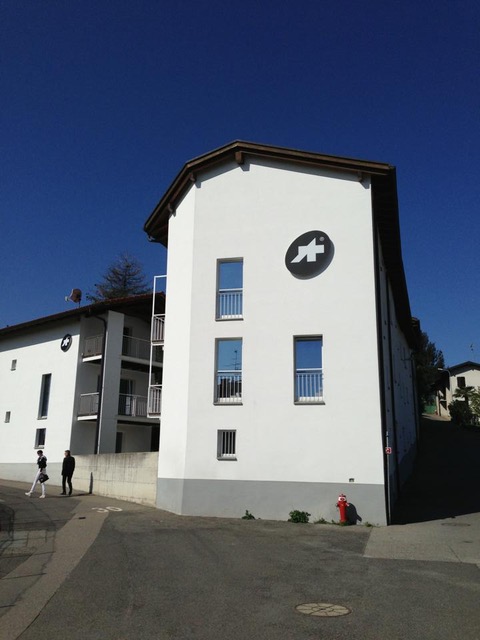 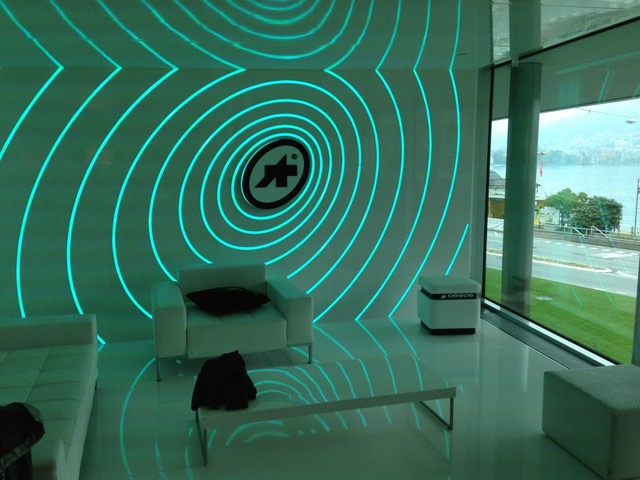 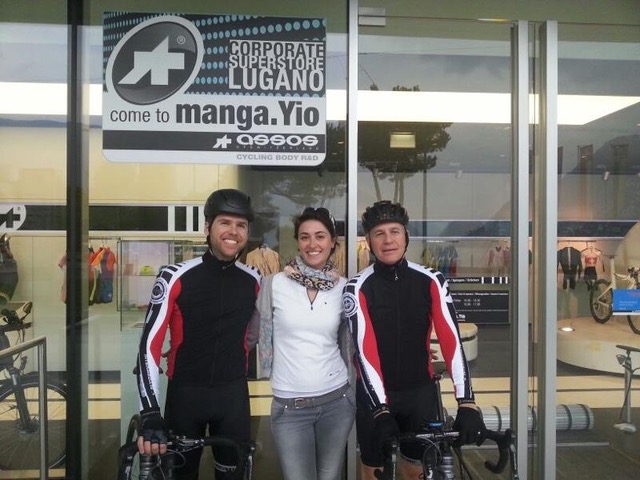 I was truly blown away with the attention to detail that goes into the planning and development of all the Assos garments. Especially riding shorts. The most fascinating part was that the new S7 bibs were a total reinvention over anything else they had previously produced. It literally shared no design features from the previous generation. From what I was told by Desiree Maier (Daughter of Assos' Founder Toni Maier) is that her brother Roche who was at the head of the company at the time had what was described as a "design incubator" situated outside his office. This is where new inventions would be placed. Each day when Roche would come into his office, he would stop by this incubator and go over its contents. Some days he would remain content with what was brewing in the design phase. On other days, he would see something he didn't like about a particular garment, curse at it and pull it out of the incubator. Apparently, if something was able to last one month in the incubator, it would graduate over to the next phase of development. Rumor has it, that there were over a hundred iterations of the S7 bib before they narrowed down this masterpiece. To me, the Incubator is like a cocoon that over time will produce a beautiful butterfly.

The new S7 bib short line introduced an expanded line up of new shorts, that were categorized by its fit and performance features. These design features were unique and creative "out of the box" thinking. Each of the 4 models of shorts featured a floating chamois, that was called "Golden Gate" the design concept was to only sew down certain areas of the chamois, thus to allow the chamois to remain static, and for the leggings of the shorts to move independently. Eliminating the common sawing effect that can happen when the chamois is completely sewn down. The top two models have an interesting feature called the "Kuku penthouse" which is a pocket at the front of chamois, that acts as an apartment for you know what… If you still don't know, use your imagination… This feature really does work, and really enhances comfort.

A first for Assos in the S7 generation of shorts was a new price point of $199.00 CDN with the T.NeoPro_S7 model, Now everyone had the opportunity to rock Assos bibs, and roll up to the local club ride looking fresh, and be is confused as being Swiss! 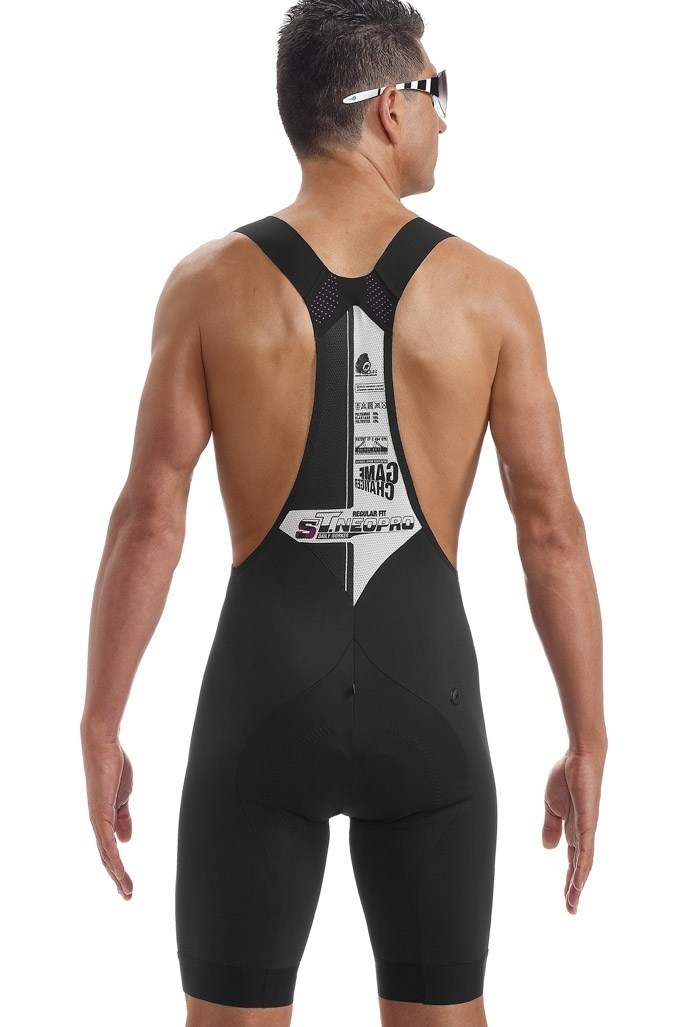 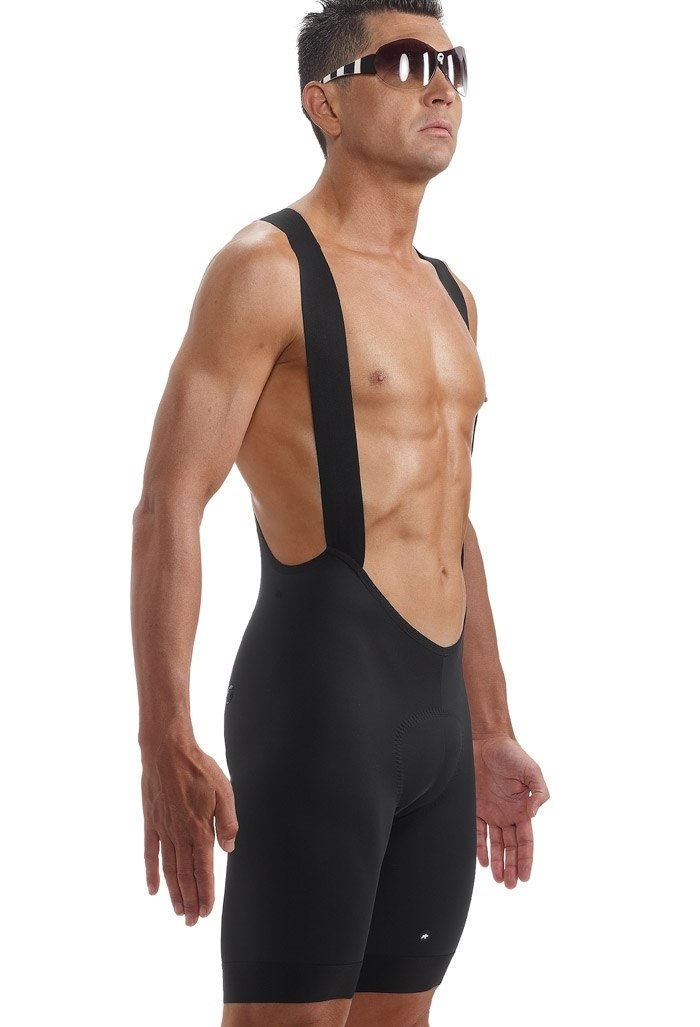 Next in line was the T.Equipe_S7, which was a no-nonsense racing bib. Plain black, no frills, a comfortable, durable chamois, and a racing fit. These are the key ingredients for the most serious racers.

Arguably the best short in the series was the T.Cento_S7. Considered the most luxurious bib short ever produced. The T.Cento pulled out all the stops for comfort. Categorized as a "comfort fit" It featured a front panel that was perforated to allow for more drying capability, it had the densest chamois for those epic long rides, and last but not least, the Kuku penthouse. The Hugh Hefner of cycling short features. For us, this was the best seller out of all four shorts, and that was astonishing considering the price tag was $369.00 CDN. It was not uncommon to have customers purchase multiple pairs as they would claim that they couldn't wear anything else. 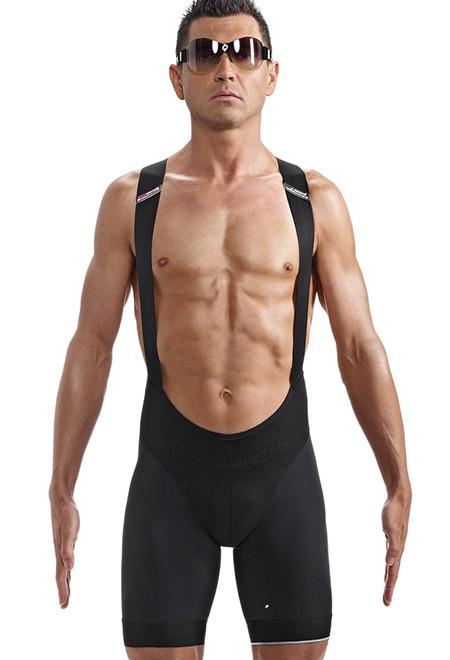 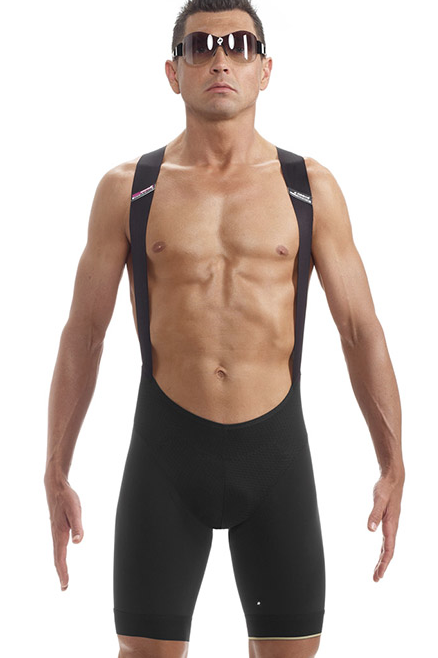 As good as the T.Cento is, the top of the line was the T.Campionissimo model. It was the lightest of them all, it had the most compression, a hybrid chamois that was a cross between the T.Equipe and the T.Cento, Golden Gate, Kuku penthouse and all. Not to mention a gold band on the left leg gripper, and a cool gold Assos logo on the left rear panel. If God bought cycling shorts this would be it. But all this heavenly bib short goodness came at a price of $519.00 CDN, which didn't help with the overall sales of the T. Campionissimo However, this was the best cycling short the world has ever seen… Or is it?...

The All New S9 Collection

January 2019, marks the birth of a butterfly, and the release of the new Assos S9 generation of bib shorts. Six years in the making, the S9's appear to be the perfect blend of simplicity and sophistication seamlessly at once. Everything that has been learned through the development and experience of the previous generation of Assos shorts is embodied in this new series. Instead of an entire re-do, as what we saw with the S7, the S9 shorts retain certain aspects and improve upon tried, tested and true features of the S7.

The butterfly reference comes from the two-piece panel construction, that when unassembled resembles the wings of a butterfly. The concept of less is more and is an attempt at reducing as much friction as possible, Resulting in more comfort. But that is only the beginning. The S9 bibs have other design features, that aid in greater static positioning of the chamois. Which became a complaint of the previous shorts. It was like the chamois floated too much. 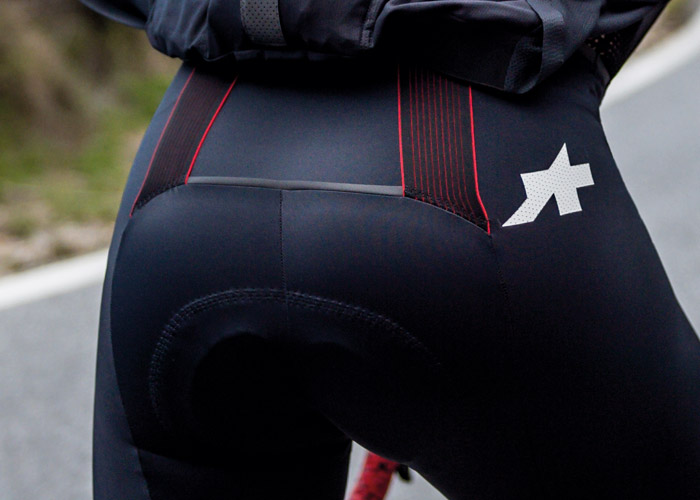 Assos has corrected this with the "Rollbar" which is essentially having the shoulder straps running down along your lower back, to lock in the rear panel and helping to keep the chamois in place. Furthermore, this aspect is reinforced by the "Ergobox" which is the square panel construction and frames the chamois, boxing it in for increased stability. Another unique and major feature of the short is "Carbon X-Bib" A single section of the bib strap material forms an A-Frame, increasing support while allowing the independent function of the shoulder straps and the Rollbar feature.

The S9 also has a new chamois. That has greater breathability, and comfort. There are major holes or vents in the front of the chamois called "Kratercooler" to aid in that respect. The Golden Gate continues onto the new S9, along with a new primary foam called Superior Microshock, which is very shock absorbing. We have noticed that the chamois is also sewn in a bit more, in comparison to the S7 models, and we are assuming that is to help with the static positioning of the chamois. 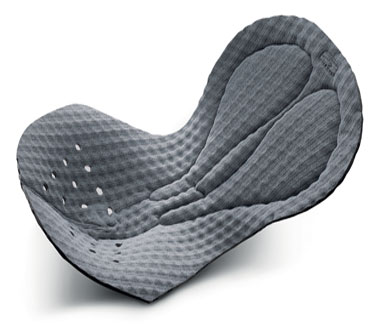 It's an exciting time, whenever Assos launches a new line of cycling shorts, which doesn't happen too often. The new line of S9 shorts, which is projected to expand with new models dropping later this year, and into next season. It looks like the butterfly has come out of its cocoon, and is ready to fly.